Pokemon Mega Emerald X and Y Edition are two of the most recent editions of the game Emerald. As the game’s name suggests, this is an advanced version of the Emerald Game, which is a huge hit in all of the Pokemon games. Certain new types of characters and Pokemon are included in the game, and the new storyline will make you want to play it even more. Because this is in completed status format, you don’t have to worry about the game’s completion or update. You have the option of playing the game with all of its features and updates, as well as completing all of the pending missions. With that said, let’s move on to the next stage and talk about the game a little bit more.

Basic Info about the Game:

Perhaps you’ve played the main games of this version, by which I mean the Emerald, Pokemon X, and Pokemon Y ROMs. If you answered yes, you are in luck because you will be able to test and experience the full features of all three games, as well as some amazing new features that will make your gameplay experience very different from other games you have played. The new cast and crew in the game are fantastic, and you will notice some changes in the game’s pokedex as well. As you may be aware, the pokedex is not always in the completed state, and you must complete it in any case.

The main character must stay in the current area and find a different type of pokemon, which may be difficult for you. Because some of the older pokemons are extremely rare and exhibit wild behaviour. As the main trainer, you must learn the skills of learning how to train specific pokemon in a short period of time and then put them into practise. The implementation phase may vary from time to time and depending on the circumstances. There are many rival teams in this area, and you must keep in mind that these rivals are always prepared for certain challenges. You must become stronger and more skilled so that you can fight and challenge them. Also, check out Pokemon Grape Free Download (v1.5 Latest)

The Mega Evolutions in the game are edited and presented in various formats. You’ll notice that every single pokemon has mega evolutions that can change your entire game mode. Surprisingly, these evolutions differ from previous ones. If you are a fan of legendary Pokemon, you will notice that they are all present from Gen 1 to Gen 6. These are some of the game’s special features that set this Pokemon Mega Emerald X and Y Download Version apart from other versions of Emerald.

About the Sound/Music System:

The music is one of the game’s unique features, huh? If you’re thinking of old school music, you’re probably wrong, and you should know that the music is completely fresh and unique. New music formats that make the player feel refreshed and energised. One unique feature is that the music changes in response to the events and weather. If you play the game during the day, you will notice that the music is different from that which is played at night or in the evening. Similarly, it changes depending on the weather conditions, such as how you feel and listen to music in the snow versus how you feel and listen to music in the rain mode. Download Pokemon Ultra Shiny Gold Sigma as well.

The events of the game are, I believe, 40% new, as some have been replicated from previous versions, such as some from the X and Y roms. However, if you recall, the events of Pokemon X ROM were also fantastic and more enjoyable. The new mechanics have been added to the game. There are also some special features and things that can be accessed during these events. These are the more amazing changes that have occurred in my life thus far. Check out Pokemon Liquid Crystal ROM and Pokemon Advanced Adventure ROM as well.

In addition, some new pokemons have been added to the pokedex, which should make the game more complete and enjoyable to play. There are also some nice wild and water type pokemon in the pokedex. Because some of the locations are still unfinished.

Pokemon Mega Emerald X and Y have a completely different battle system than Pokemon Emerald. It will now have a turn-based battle system, unlike the current Pokemon Ruby, Sapphire, Emerald, FireRed, and LeafGreen, which have a real-time battle system. Pokemon Mega Emerald X and Y will have a Pokemon Gauge that will gradually fill up, allowing Pokemon to use moves with Pokemon Gague levels higher than the Pokemon’s current level, whereas in Pokemon Ruby, Sapphire, FireRed, and LeafGreen, it could only be used once per battle once Pokemon reached Level 50.

This is a necessary change in my opinion, as Pokemon battles can last several hours. What are your thoughts? Comment on whether you agree or disagree with having turn-based battles in the comments section of this post/blog. If more people like me (people who despise Pokemon’s current battle system) leave a comment on this blog explaining why they despise Pokemon’s current battle system.

Because of changes to the battle system in Pokemon Mega Emerald X and Pokemon Y, moves will now be based on power rather than type effectiveness. Because there are too many Pokemon types, type effectiveness has been abandoned (22). If your Pokemon learns one of the special moves discussed later in this article. It has the potential to become extremely powerful! You must use them wisely during battles, or they may easily turn against you if your opponent can read quickly enough.

Mega evolutions for Pokemon in Pokemon Mega Emerald X and Y are now more common than before, and the player can obtain mega stones in ways other than random battles, as was previously the case. Unlike Pokemon Ruby, Sapphire, and Omega Ruby/Alpha Sapphire, which require both the Pokemon and its hold item to mega evolve, the Pokemon will no longer require their item because they can mega evolve without it using Mega Evolution Mode, which can be activated by pressing the R button. Pokemon that are currently in Mega Evolution Mode will have their move set changed as well as a new ability when they are mega evolved; however, Pokemon with low happiness may not be able to mega evolve at all.

Pokemon Emerald has given all Pokemon a visual makeover. 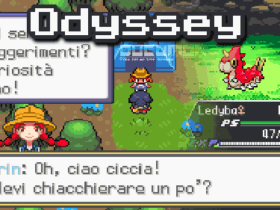 Pokemon Odyssey is a GBA ROM Hack by PacoScarso based on Pokemon Fire Red. And it is now available to download. It was last updated on September 25, 2022.