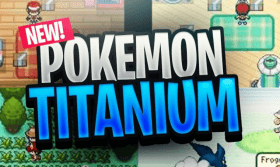 Pokemon Nukleon is a Pokemon GBA Rom Hack by MKSSB based on Pokemon Fire Red in Spanish. And It is now available to download.

Also, be sure to try out Pokemon Orange Adventures

In the heart of Caligo once existed an ancient high culture. They worshipped the Anirapto gods. A ferociously powerful primal Pokémon who ruled over lightning and thunder. People threw themselves unconditionally into the dark ruler out of fear and fear of death. This, however, did not last long. They rebelled against their own God in order to wield its power. However, the primitive Pokémon’s strength was underestimated. Anirapto was able to flee the ancient temple complex. Anirapto moved across the region, destroying everything that stood in his way as a form of retaliation for the people’s actions. The most powerful survivors were eventually able to restrain the beast and send it to an eternal sleep. However, a prophecy was made. Anirapto will awaken from his slumber at some point, bringing darkness and horror back to the region. However, the prophecy also states that with Anirapto’s awakening, a hero will begin his journey. Only this will be able to defeat the beast and restore peace to the region. But will the prophecy come true? Will the hero be able to save Caligo from total annihilation? Will he be able to stop Anirapto?